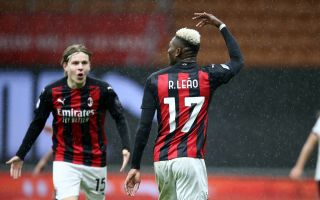 AC Milan are looking at potentially selling five players to fund some new signings in the summer window, according to a report.

According to Calciomercato.com, Milan are proceeding with great calm in the planning of next season and money has already been paid out to sign Fikayo Tomori and Mike Maignan, while a permanent deal for Sandro Tonali is also expected.

A number of sales could help raise money to invest in other areas, with Rafael Leao mentioned as he has many admirers abroad. His agent Jorge Mendes is trying to find an accommodation and Borussia Dortmund are ahead of the others in the race to sign the Portuguese forward, who will not leave for less than €30m.

Tommaso Pobega is very close to joining Atalanta for a figure that will be around €12m, while Jens Petter Hauge has strong admirers in the Bundesliga. Finally there are Andrea Conti and Mattia Caldara, both of whom returned to Milanello from Parma and Atalanta respectively. For the former Sampdoria are interested, but a €5m asking price has been set. For Caldara, there is no serious interest. He will begin his preseason with the Rossoneri and then his future will be evaluated.