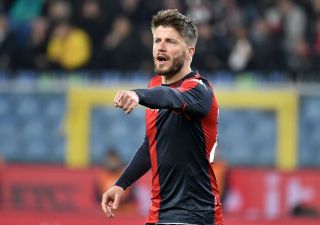 AC Milan and Napoli are both interested in a move for Lasse Schone who is destined to leave Genoa, according to a report.

Schone joined Genoa back in August, signing a two-year contract with a reported fee of €1.5million being paid to Ajax (as per Wikipedia).

Ironically, he scored his first goal for the Rossoblu against Milan, giving them the lead in an eventual 2-1 away win. In the same match, he also missed a 90th minute penalty kick.

According to Calciomercato.com, the Danish midfielder has struggled thus far at Genoa because of a team that has reflected in him the many difficulties encountered so far.

Despite this, there are two clubs within Serie A who are willing to take a chance on the 33-year-old: Milan and Napoli.

The latter reportedly see him as an alternative to Lucas Torreira should their pursuit of the Uruguayan prove too complicated.

Meanwhile for the Rossoneri – who are looking for fresh faces in the midfield – the eventual arrival of Schone could only happen should Lucas Biglia leave next month, the report concludes.