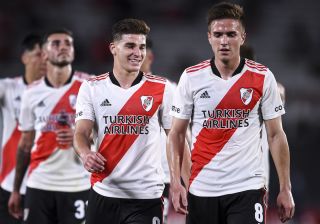 CM: Milan could soon present bid for €25m man they believe would be a great fit under Pioli

Another report has emerged claiming that AC Milan sent a scout to watch Julian Alvarez in action during last night’s win for River Plate against San Lorenzo.

Calciomercato.com writes that Milan had a delegate fly overseas to watch Julian Alvarez first hand as his explosion with River Plate continues. River beat San Lorenzo 3-1 thanks to a hat-trick from the 21-year-old, so the scout was probably impressed by Alvarez, who has been on the wish list of Massara and Maldini for several months.

They see him a player with the right skills for Pioli’s playing style given that he is a mobile and fast forward, able to act both as a pure striker, a support striker or even on the wing. Ajax, Aston Villa and Bayer Leverkusen also believe that he would be a fit for them though, which is an obstacle.

He will soon leave River Plate to make the leap to Europe, and in his contract there is a release clause of €25m but his deal expires in December 2022. Milan’s interest is concrete even if an official negotiation has not yet begun with River Plate.

A formal proposal could be present to Los Millonarios by the Rossoneri too, but Inter are also keen and he could try to follow in the footsteps of Lautaro Martinez, who signed from Racing.