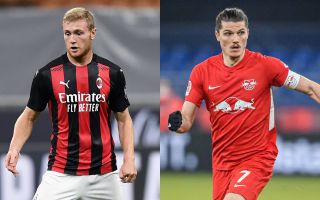 In order to strengthen the squad this summer, Milan need to part ways with a few players as well. Not just on a numerical level, but also so they can avoid getting in trouble with FFP by using the money from the sales.

According to Calciomercato.com, Tommaso Pobega’s departure is one that could result in a signing for the Rossoneri. The young midfielder is expected to join Atalanta and the transfer fee should be over €10m.

Milan could then use this money to make a move for RB Leipzig star Marcel Sabitzer, whose contract will expire next summer. He has a price tag of €20m and the money gathered from Pobega’s exit could be the boost needed.

The Austrian would replace Hakan Calhanoglu, who rejected the Rossoneri’s renewal offer and decided to join Inter instead. It remains to be seen if Paolo Maldini and Ricky Massara will make a move for Sabitzer.

READ MORE: Shevchenko thanks Milan fans for supporting him and Ukraine during Euros