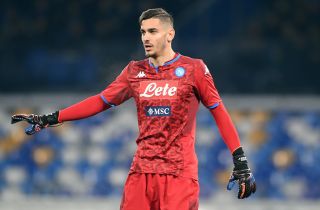 AC Milan could make their move for Napoli goalkeeper Alex Meret this summer, a report claims, with a swap deal possibly on the table.

Donnarumma’s contract expires in 2021 and while the vast majority of reports claim that the Rossoneri want to renew their prized shot stopper, they must find an agreement soon or they will be forced to sell in the summer, so as to not lose him on a free transfer next year.

A number of replacements have subsequently been linked and one who has been repeatedly mentioned is Alex Meret, who has fallen behind David Ospina in the pecking order at Napoli under head coach Gennaro Gattuso.

According to what Calciomercato.com are reporting, Milan have not yet made any decision on the goalkeeper front because Gigio Donnarumma’s situation is developing and it remains to be seen in which direction it goes.

While talks with agent Mino Raiola at the moment remain stalled, the name of Meret is among those that have emerged as an opportunity should Milan have to sell Donnarumma.

Meret for his part will be happy to leave if he does not receive guarantees regarding his playing time. To date, dealing with Aurelio De Laurentiis remains complex given the investment made to sign Meret from Udinese two years ago.

Therefore, the valuation of the 23-year-old is no less than €30million, so a counterpart could be included such as Franck Kessie (valued at €25m), a name held in esteem by Gattuso.

The report concludes by stating that Arek Milik is the other player that the two clubs may discuss in the summer.