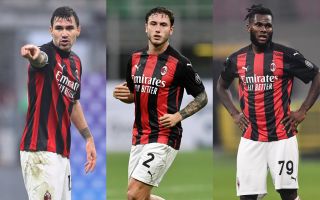 After what has been a good year for Milan, 2021 is now here. Although focus is on the pitch and their league lead, the directors are also starting work on several renewals to avoid another Donnarumma-esque situation.

As reported by Calciomercato.com, the issues experienced with Gigio Donnarumma and Hakan Calhanoglu have forced the Rossoneri to act on other fronts as well. They don’t want to negotiate renewals with just a few months as deadline.

The captain has been hailed by CEO Ivan Gazidis as a unique figure and the intention is to keep him, but the negotiation is tough. It’s tough to imagine a salary increase (currently €3.5m), both for financial sustainability and balance in the locker room.

As for Calabria and Kessie, though, negotiations are proceeding at full speed. Maldini appreciates the full-back a lot and has initiated contacts with his agency, with the goal being a renewal until 2024 with a salary increase (currently €2m).

The same goes for the midfielder, with contacts already underway and the idea of renewing until 2024. It will be extremely important for Milan to look these players down, that’s for sure.

READ MORE: Milan delighted with €7m investment as Saelemaekers now is worth €20m+