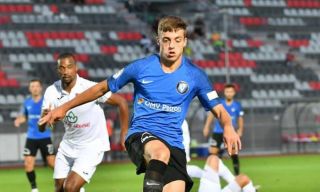 AC Milan are one of the clubs interested in signing playmaker Stefan Bodisteanu from Viitorul in Romania, according to a report.

Calciomercato.com reports that the Rossoneri scouting department have cast an admiring glance over the 18-year-old, who already has six appearances in the first team.

One of his greatest admirers is the best footballer in the history of Romania, Gheorge Hagi, and he coached the player when he was coming up through the youth ranks.

Milan have been following the player for a few months, and believe that he is a top talent who boasts tactical intelligence: a skill that allows him to often find the position between the opposing lines and to position his body in the most effective way to free himself and create space.

Bodisteanu has a contract expiring in 2022 and that could soon be extended in order to fend off the interest from some top clubs, who have taken notice of a player who The Guardian named in the list of the best world talents born in 2003.oks of Milan observers.