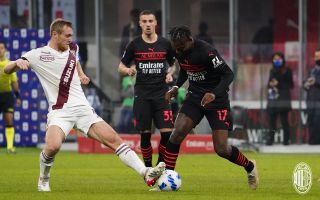 CM: Milan left impressed after midfielder’s audition against them – the plan for his future

Tommaso Pobega was one of the stand-out performers during last night’s game between AC Milan and Torino last night, and the Rossoneri were watching closely.

After returning from his loan spell with Spezia last season, the Milan management decided that it was right to give Pobega another loan experience at another club and decided to send him to work with Ivan Juric at Torino. As the rules of the loan allow, he started against his parent club at San Siro last night.

Calciomercato.com writes that Pobega was watched closely by Milan during last night’s game as he impressed in the midfield where the Rossoneri were unable to assert their usual dominance.

Pobega moved to the Granata on a dry loan – therefore without an option or obligation to buy included – and in all likelihood he will return to base at the end of the season, even if the Torino director Davide Vagnati hopes to be able to find an agreement to add an option to buy.