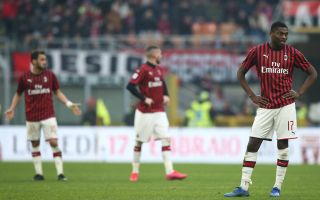 CM: Milan perform U-turn regarding stance on €24m signing – offers will be listened to

AC Milan have changed their stance on the future of Rafael Leao after a disappointing first season from the Portuguese forward, a report claims.

Leao arrived from Lille last summer with the expectation that he would be the most exciting of the crop of six recruits in that window, however he has scored just twice all season and has struggled to make a big impact.

According to Calciomercato.com, the 21-year-old now finds himself at a crossroads in which he must either show his ability between now and the end of the season or he will be put on the market.

His attitude in last Friday’s draw against Juventus has come under scrutiny, both from head coach Stefano Pioli and the club, as Leao looked lazy and uninterested.

The excellent performances against Torino and Fiorentina have drifted from the memory, and now Leao has twelve games to try and convince Milan about his future.

Zvonimir Boban was convinced he had brought a young talent to Milan with a champion’s potential – for a price of just €24million plus Tiago Djalo too.

The Diavolo had also beaten competition from Napoli, Roma and some English clubs. Now everything has changed: if a good offer arrives it would certainly be taken into consideration, with the clear imperative not to record any loss on the balance sheet.