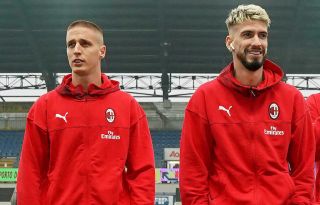 AC Milan are looking to boost their January transfer budget by completing the sales of three out-of-favour players, a report claims.

According to a report from Calciomercato.com, Milan have a remaining €15m worth of budget from the summer window that was not spent as their pursuits of Kabak, Simakan and Fofana all failed.

That figure will be available to be invested in the winter market, but there are three players who could also pack their bags and leave in order to significantly boost the transfer kitty.

Starting with the defence, Andrea Conti and Leo Duarte are struggling to find playing time despite the fact they have both recovered from injury. If offers arrived that would not lead to capital losses, they could lead.

Around €7.5m is the cost of Conti at the moment while for Duarte the figure would be €7m. For the former the interest of Parma remains, for the latter there are admirers in Brazil.

Samu Castillejo could also depart in the winter window and the former Villarreal man could return to his homeland. In the past he has always given priority to Milan and has rejected offers from teams such as Espanyol, but with a convincing offer of around €15m, Maldini and Massara could persuade him to leave.

Sevilla in particular are mentioned as being interested, which is where Suso went in the last winter market before being bought outright in the summer.