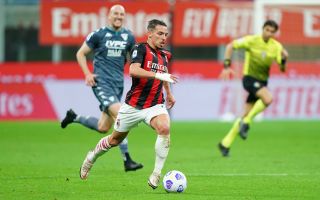 Milan are still in the Champions League race after their win against Benevento last night, currently in second place again as their rivals will play today. For the Rossoneri, there were several positive performances in the game.

As reported by Calciomercato.com, Theo Hernandez, Franck Kessie and Hakan Calhanoglu were the best Milan players on the pitch with a rating of 7/10. Two of them got on target, of course, while the other did a very important job in the middle.

The likes of Gigio Donnarumma, Diogo Dalot, Alessio Romagnoli and Alexis Saelemaekers were just behind with 6.5. The captain played his first game in 57 days and really impressed at the back alongside Fikayo Tomori, who got a 6.

Zlatan Ibrahimovic got the same rating as the Chelsea loanee, mainly because he missed a few very good chances to score. Ismael Bennacer and Rafael Leao were the worst with 5.5, as both simply made too many mistakes on the ball.

Sandro Tonali came on to replace Bennacer at half-time, as the Algerian was dangerously close to a red card, and he did well in the centre of the pitch. He got a 6.5 by the outlet.