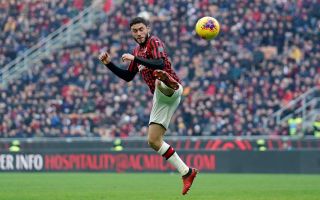 AC Milan full-back Davide Calabria is attracting interest from three clubs ahead of the summer transfer window, according to a report.

The right side of Milan’s defence has been a problem all season for Stefano Pioli, with Calabria and Andrea Conti both failing to hold down a spot in the starting XI consistently due to a combination of injuries, suspensions and general poor form.

According to the latest from Calciomercato.com however, the 22-year-old may be offered a chance to relaunch his career elsewhere in the upcoming mercato.

LaLiga side Sevilla are keen on acquiring his services, while in Serie A both Bologna and Fiorentina may present offers to Calabria.

Alessandro Jacobone on Twitter recently claimed that the Rossoneri and La Viola have discussed the possibility of a swap involving Calabria and Sassuolo-owned right-back Pol Lirola. Lirola is currently on loan at Fiorentina from Sassuolo, but the Florence side have the obligation to buy him permanently.