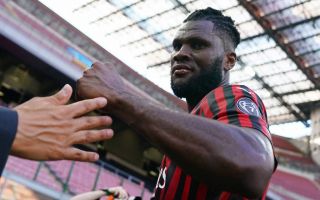 CM: Milan star ready to snub Arsenal and Spurs to renew – the words and deeds prove it

AC Milan want to reach an agreement with midfielder Franck Kessie over the renewal of his contract until 2024, a report claims.

Calciomercato.it reported yesterday that Kessie is highly regarded in England, with Arsenal and Spurs believing he has the perfect characteristics for the Premier League, though a bid of €40-50million may not even be enough.

As Calciomercato.com reports, Kessie has become one of the stars of a Milan side that is giving the club its best form in many a year, but given that his contract expires in 2022 the management are keen to avoid another situation like the Hakan Calhanoglu one – where time is working against them – and to get his future resolved ASAP.

The Ivorian seems to be effective alongside either Bennacer or Tonali, and when he scores Milan never loses: in the previous 20 games in which he has netted, Milan have racked up 18 wins and 2 draws.

Kessie himself declared a few weeks ago just how much it means to play for the club, which means renewal discussions will begin on the right foot.

“Wearing the Milan shirt is an honor but it is also a great responsibility. We represent millions of fans all over the world and we all work every day with commitment and perseverance to bring Milan back to where it deserves,” he said.

“I never even thought of leaving Milan, and no one in the club has ever asked me. Wearing this shirt, which I now consider like a second skin, is a pride for me and for my whole family.”

Paolo Maldini knows how important he is too, revealed in his most recent declarations: “Franck has shown his love for Milan. He wants to bring this club back to the top, like so many others here in the club.”

Nobody wants the journey to stop, and contacts for the renewal of his contract have started, with the goal is to extend the relationship until 2024. The President is ready to continue his Rossoneri adventure.