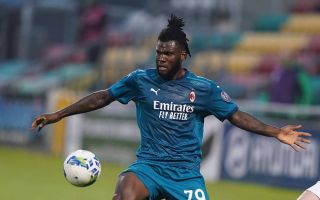 CM: Milan thinking about renewal for star midfielder – the background on Napoli’s interest

The future of Franck Kessie has done a complete 180-degree turn since the start of the year. If going into the January window he was very much sellable, now he is immovable.

The Ivorian has become a crucial part of the 4-2-3-1 system that has worked wonders for head coach Stefano Pioli, as the central midfield pairing is such a vital cog in the machine.

After struggling in the first half of 2019-20, Kessie now covers the field better, players with more freedom and has formed a fantastic partnership with Ismael Bennacer.

According to Calciomercato.com, Kessie was at the top of Napoli’s wish list last summer. Gattuso had specifically asked Napoli sporting director Giuntoli to sign him, but there was never a real negotiation because the former Atalanta star expressed his desire to stay, while Milan asked for €30m.

Kessie wants to win with the Rossoneri shirt, and for this reason the possibility of renewing his current contract – expiring in 2022 – has come to the fore. For Maldini and Massara it is not a priority, but there is a desire to talk about it, in the right time and manner.