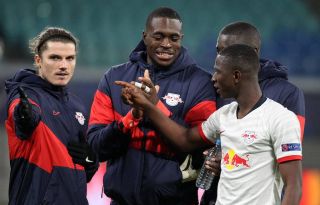 CM: Milan to keep a close eye on €125m-rated quartet when Bundesliga resumes

AC Milan will have a close eye on a number of different players once the Bundesliga resumes this weekend, according to a report.

The German top flight will be the first major European league to get back underway, with a number of high-profile games on the agenda including the Revierderby between Dortmund and Schalke on Saturday.

According to the latest from Calciomercato.com, Milan will be observing numerous players who could be targets ahead of another potential revolution this summer.

Firstly there is Dayot Upamecano of RB Leipzig, a player who has a €60m release clause and is also attracting the interest of Arsenal and Bayern Munich.

He is not the only Leipzig player who Milan will take a look at though, as €15m-rated midfielder Amadou Haidara is also catching the eye of Rossoneri scouts.

Eintracht Frankfurt centre-back Evan N’Dicka is also on the wish list: he will cost €25million, but Milan can use good relations with the German club to their advantage.

Calciomercato.com adds that Milan are following Mario Gotze’s situation again after rejecting him in January, as the Dortmund playmaker is a profile Ralf Rangnick likes it a lot, but the obstacle is his €8m-a-year salary.

Jean-Clair Todibo is a player that the report claim continues to interest Milan after negotiations in January, but he may also be used in negotiations with Inter for Lautaro Martinez, and that is only if Schalke reject their €25m option to buy.