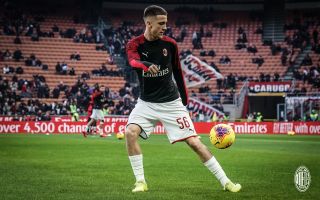 CM: Milan to sign Anderlecht winger – an investment for the future under Rangnick

AC Milan are moving towards signing winger Alexis Saelemaekers on a permanent deal at the end of the season, a report claims.

The Belgian had struggled for game time since his arrival on loan from Anderlecht prior to Sunday’s game against Roma at San Siro, but he was given 39 minutes to prove his worth and he made the most of it.

He brought some flair to the game that a tired-looking Samu Castillejo struggled to offer. While we did not see anything breathtaking, the 21-year-old looks to have potential to build on if given more playing minutes to gain confidence.

According to Calciomercato.com, Saelemaekers arrived due to the recommendation of chief scout Geoffrey Moncada, and Milan intends to respect their deal with Anderlecht and sign him permanently for €3.5million.

An investment for the present and, above all, for the future in line with the ideas of Elliott and future manager Ralf Rangnick.