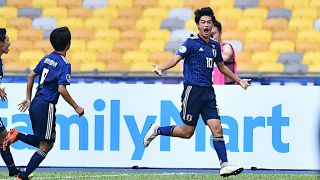 CM: Milan will rival Barcelona and Leipzig for Japanese wonderkid if Rangnick arrives

Nishikawa began his career at FC Aoba, the youth sector of the Yokohama F-Marinos – winner of the last J-League – and the Tokyo Gakuen High School (with his brother) before signing for his current club last year.

The 18-year-old has not yet managed to establish himself in Osaka but is already well known to various talent scouts after his exploits at the U17 and U20 World Championships for Japan.

He started as a striker but is a full-fledged number 10, playing between the lines.

As Calciomercato.com notes, the teenager has been linked with a move to Barcelona in recent weeks, and at the moment the clubs who are strongest linked are mainly Bayer Levekusen and RB Leipzig.

Milan could spring a surprise though, especially if Rangnick were to arrive. He of course was the one who brought Nishikawa’s compatriot Takumi Minamino to Salzburg before his move to Liverpool.

If the German arrives at Milan, he will bring his team of observers and talent scouts to Italy who will continue to keep an eye on Nishikawa.