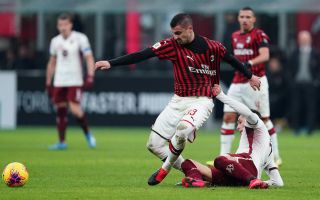 CM: Milan willing to sell outcast with Torino interested – No.1 target to replace him identified

Torino are back on the trail of Rade Krunic and are planning a new attempt to sign him from AC Milan in January, according to a report.

As Calciomercato.com notes, Torino made a bid to try and sign Krunic in the summer transfer window but were unable to complete a deal, and their head coach Marco Giampaolo – who had the Bosnian at Empoli and in 2019 brought him to the Rossoneri – has specifically requested his purchase.

The two clubs, who a few months ago set up the Ricardo Rodriguez deal, will discuss a deal again in the coming weeks. Milan consider Krunic to be sellable just as they did in summer when the asking price was €8m, and this time around it could be a slightly lower demand.

However, it will not only be necessary to find the right price point, but the Rossoneri need a replacement who can join Bennacer, Kessie and Tonali. Boubakary Soumaré of Lille is the first choice, but beware of surprises.