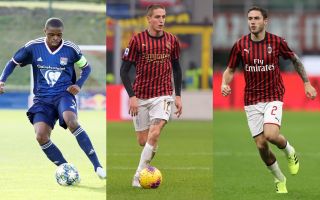 CM: Milan’s strategy for the right-hand side has changed – Calabria, Conti at risk

After upgrading on the left, with the arrival of Theo Hernandez, AC Milan are also looking to fix the right side. Andrea Conti and Davide Calabria have failed to convince and now the Rossoneri need consistency.

At the end of the season, therefore, the look of Milan’s right-hand side could change completely. According to Calciomercato.com, Fiorentina and Bologna are interested in Calabria and his sale would guarantee a full capital gain for the Rossoneri.

It’s more difficult to imagine the sale of Andrea Conti, though, as he currently weighs €12.5m on the balance sheet. Ivan Gazidis doesn’t want to make big losses and this could ‘save’ the former Atalanta man in the end.

However, who will be the starter next season? Milan managed to secure Pierre Kalulu on a free transfer, beating the competition of Sevilla and Bayern Munich. That being said, it’s a move for the future, given that the starlet made zero Ligue 1 appearances.

Instead, Denzel Dumfries has been heavily linked with the Rossoneri, being able to slot right into the starting eleven. PSV have eased their initial demand of €25m and now a decisive meeting with Mino Raiola is needed.