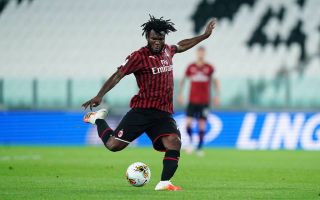 Due to complications with his flight from the Ivory Coast, Franck Kessie arrived late when training took off ahead of the resumption. Despite this, he has still amazed everyone with his physical condition and new-found form.

As highlighted by Calciomercato.com, Kessie dominated the midfield in Milan’s big win against Lazio at the Olimpico. Absolutely decisive in defusing Sergej Milinkovic-Savic: a duel won in all parts of the field with physical strength and a new tactical maturity.

The Ivorian seemingly has a new role, playing more as a defensive midfielder while letting Ismael Bennacer strive forward. With regards to the future, he has the perfect characteristics for the philosophy of Ralf Rangnick.

Intensity, ability to quickly shift from both phases of the game and above all, he still has a lot of room for improvement. These are three fundamental factors for the Rossoneri’s upcoming manager, who likes to focus on youth.

His contract with Milan will expire in 2022, so the club aren’t in a rush to start the renewal talks. The matter is on CEO Ivan Gazidis’ desk but he will assess it without any stress in the coming months.

Per the report, Gennaro Gattuso and Napoli made an attempt to sign Kessie, but it was deemed unsatisfactory by Milan and the player himself. In all likelihood, the midfielder will remain at the club for the new project with Rangnick.