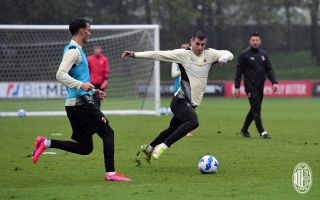 AC Milan head coach Stefano Pioli has granted his players a period of rest after a very intense fixture list to begin the new season.

The Rossoneri ensured that they will head into the international break flying high in Serie A with only Napoli above them, having won six of their first seven games to open the league season including a 3-2 win in Bergamo against Atalanta last night.

That concludes a fixtures calendar which included a stretch of seven games in the last 20 days, meaning the players will no doubt be feeling the effects on their bodies.

Calciomercato.com writes that after this morning’s training at Milanello, Pioli granted his squad three days of rest also by virtue of the international break. Those who have been summoned will go and join their respective camps, while the rest of the team – such as Rebic, Giroud, Ibrahimovic and others – will return to training on Friday.