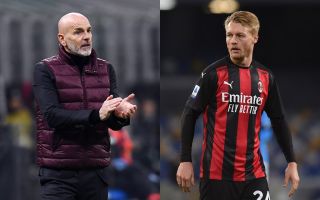 Following the 3-2 win over Lazio, which was the final game of the year, Milan will start training again on Tuesday. January will be an interesting month for the Rossoneri, considering the tight schedule and the mercato.

Milan will re-start the season next weekend, taking on Benevento away from home in the 15th round. As reported by Calciomercato.com, Stefano Pioli is already thinking about the possible starting eleven for the team.

Ismael Bennacer, Matteo Gabbia and Zlatan Ibrahimovic are still injured and will miss out on the clash, while Theo Hernandez is serving a one-game ban. On a positive note, though, Franck Kessie is back from suspension and will start the game.

Among the currently injured players, Simon Kjaer is the only one who has a chance of recovering for the game. It’s a close call, but the Dane could be back in the squad list for the game, although a spot in the starting eleven seems tough.

READ MORE: Milan handed boost by Man Utd as talks regarding loanee are on the cards