Real Madrid have been left ‘enraged’ by the actions of striker and reported AC Milan target Luka Jovic, it is claimed.

According to Calciomercato.com, Jovic is the Rossoneri’s primary target to reinforce their attacking department this summer amid the doubts over the future of Zlatan Ibrahimovic.

The Serbia international however would like to play his chances at Real Madrid, a club that last summer paid out €60million to sign him from Eintracht Frankfurt . Now injured, the Serbian has become the protagonist of another episode that has put him at the centre of controversy.

After violating the quarantine at the start of the lockdown, his latest photo posted on Instagram (and then removed) showed the 22-year-old outside a soccer field grilling with friends.

In Spain gatherings of less than 10 people are allowed, but the problem is that Jovic has been told to completely rest his fractured foot in order to aid his recovery, and to not stand when unnecessary. The headline describes Real as ‘enraged’. 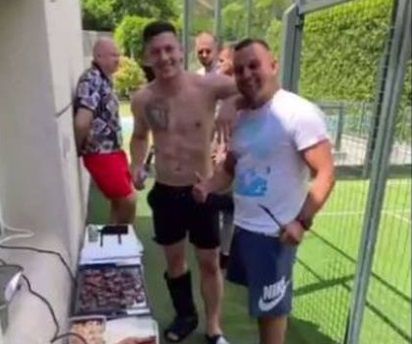