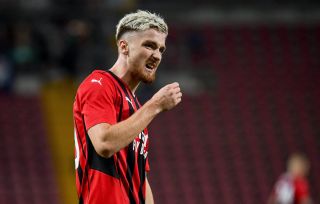 Alexis Saelemaekers can now call himself an established member of the Belgian national team, and AC Milan have no plans to let him go either.

Calciomercato.com writes that Saelemaekers is gradually gaining a leading role also with the Red Devils and he almost scored against Italy in the third-fourth place play-off for the UEFA Nations League, which drew compliments from Roberto Martinez.

“We have carefully watched his evolution, he has shown excellent signs since the Under 21 but the big change has taken place with his way of playing with the Milan shirt. Alexis is ready, the more important the occasion, the more he responds,” he said.

“He went to the perfect club, Milan are constantly growing and he has responded well with the Rossoneri. He will be very important for the future of the Belgian national team. He has grown a lot in recent months, he has transformed compared to the player seen in Anderlecht.”

Milan are enjoying having a player who continues to grow and develop into more and more of a well-rounded right winger. Stefano Pioli knows his importance in offering balance, but also how dangerous he can be when drifting inside to almost a No.10 position.

In the summer Maldini and Massara looked for another winger until the arrival of Junior Messias, but have always maintained that Saelemaekers is a starter. He has a contract until 2024 which at the moment leaves Milan calm and free to work on more pressing issues.