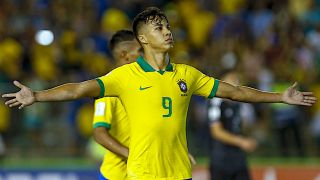 Santos forward Kaio Jorge is ready to leave Brazil and make the leap to Europe, and AC Milan are one of the clubs interested in landing him.

According to Calciomercato.com, Jorge believes it is time to leave Santos in search of a big club in Europe just like his idol Neymar did. The 19-year-old has decided not to renew his contract which is expiring in December as he wants to leave.

There are lots of clubs in contact with his agent Giuliano Bertolucci and four of them are Italian. The first to move was Claudio Lotito who wanted to sign him for Lazio last summer, but now there is a three-way challenge for the player many consider the future of Brazilian football.

Jorge – who has scored 9 times in 59 matches for Santos – is on Milan’s notebook as the Rossoneri are looking for new faces in the attacking department, but he is not considered a priority as Maldini and Massara want a real centre-forward.

Napoli have intensified contacts to try and beat the competition, while Juventus would be happy to sign him on a free transfer, guaranteeing a rich commission to his agent. Jorge however wants Santos to benefit financially from his farewell, but they are asking for €30m despite his deal expiring later this year.