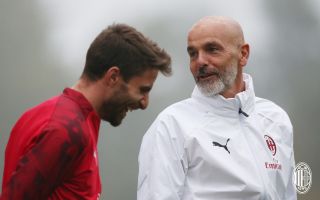 CM: The details of Pioli’s contract and the ‘gentleman’s agreement’

Replacing Marco Giampaolo on the Milan bench, Stefani Pioli is getting his side ready for his first game in charge. However, the Lecce clash isn’t until next week, meaning there is plenty of time for him to get his ideas across.

As revealed by the Rossoneri’s official statement on Wednesday morning, the former Fiorentina man has signed a two-year deal with the club. Therefore, he won’t just be a caretaker for this season, at least that is what we were lead to believe.

According to Calciomercato.com this evening, there is a gentleman’s agreement between the parties that could end the deal after this season. In fact, should Milan fail to reach the goals set, then they could part ways early with Pioli.

In order to keep his job, worth €1.25m per year, the manager will have to secure qualification for a European competition, and thus not only Champions League as stated in the report. In other words, a top-six finish could be enough.