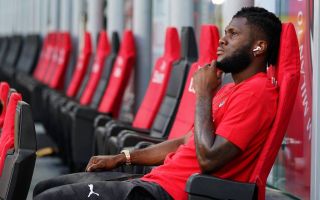 CM: The details of the meeting over Kessie’s renewal and what is needed to find an agreement

AC Milan will need another meeting with the agent of Franck Kessie if they are to reach an agreement over a renewal, a report claims.

According to what is being reported by Calciomercato.com, a two-hour meeting with his agent George Atangana was not enough to shake hands over the renewal of Kessie. He met with Massara and Maldini and had a ‘frank dialogue, without mincing words’ during which the intention to continue together was reiterated, but there is not yet a match between offer and demand.

Given that the salaries of Ibra and Donnarumma are unreachable and that the club no longer intend to pay such amounts, there is a middle ground that Kessié has won through performances. The meeting served above all to clarify these aspects and while further negotiations will still be needed, the right offer will mean that Kessié should remain at Milan.

The player has given the Rossoneri top priority, despite persistent rumours of interest from the Premier League and LaLiga. The next move is with Maldini, meanwhile Milan let cautious optimism filter through.