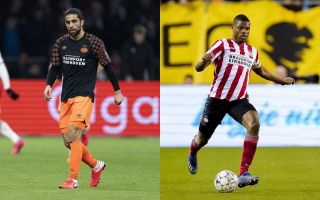 CM: The truth about the Dumfries-Rodriguez swap as Milan continue talks

In recent weeks, there have been many rumours about a potential Rodriguez-Dumfries swap between AC Milan and PSV Eindhoven. However, it seems this hypothesis has been shut down for good.

According to Calciomercato.com’s Daniele Longo, the situation of Ricardo Rodriguez is completely unrelated to that of Denzel Dumfries. In fact, the Swiss left-back will hardly stay at PSV beyond this season, although the Dutch side are happy with him.

As for the Dutchman, Milan have continued contacts but they need to solve one problem first: one right-back must leave to make room for the 24-year-old. Out of Andrea Conti and Davide Calabria, the latter would guarantee the best capital gain.

However, in addition to Dumfries, the Rossoneri are also keeping tabs on Pierre Kalulu. The 19-year-old’s contract with Lyon will expire in the summer and thus he could arrive for free, although the competition makes it a tough race to win.