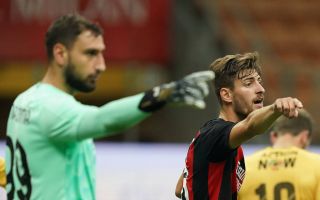 CM: Three Primavera graduates step up against Sampdoria – no team in Serie A like Milan

AC Milan keep finding a way to win games, and perhaps one of the most satisfying aspects is the fact that three Primavera graduates are at the heart of it.

As Calciomercato.com notes, there were three players in particular who performed well during Sunday’s win over Sampdoria in Davide Calabria, Gianluigi Donnarumma and Matteo Gabbia – all of whom came through the youth set-up.

Gabbia – along with his centre-back partner Alessio Romagnoli – did a fantastic job keeping Fabio Quagliarella quiet by using his size and aerial ability. The club strongly believes in him and has never taken into consideration the offers that arrived in the last mercato.

Calabri meanwhile is managing to go beyond his limits despite being linked with an exit constantly over the summer, and now he is taking his revenge on those who doubted him, growing from game to game. What was a mere possibility regarding a renewal on his current contract is now seeming like a formality.

Donnarumma meanwhile delivered another outstanding performance, keeping Tonelli’s header at bay and continuing to show that he is moving ever closer to becoming the best in the world in his position.

No team in Serie A can boast three players who have come through their youth sector like Milan, and it is of course perfectly in line with the vision of Elliott Management.