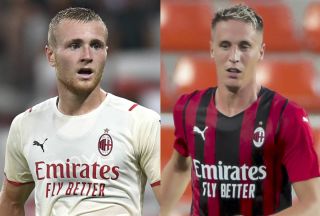 CM: Two players talked about during meeting between Milan and Cagliari – the details

AC Milan have met with Cagliari sporting director Stefano Capozucca and interest in two players has emerged, a report claims.

As Calciomercato.com reports, Capozucca was at Casa Milan to talk with Paolo Maldini and Frederic Massara about a couple of players, first and foremost Tommaso Pobega. The 22-year-old midfielder is having his first full and proper preseason after loan spells at Pordenone and Spezia, and he is admired by the Rossoblù, who looking for a player with his characteristics to replace the injured Rog.

Milan are reflecting on the possibility of sending Pobega out on loan again to continue his growth path and if they do then they must pick the right destination, given the interest of Sampdoria and Torino.

In addition, Cagliari asked about Andrea Conti who returned to Milan after his loan at Parma. Contacts have been going on for days with the entourage of the ex-Atalanta man, and it has emerged that he is asking for a four-year contract.

READ MORE: Milan and Atalanta both digging their heels in over Ilicic with €10m the request