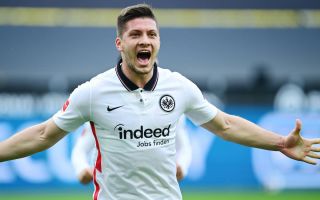 As the Olivier Giroud saga continues to drag on, AC Milan are reportedly beginning to look at alternative solutions and have cast their eyes towards Real Madrid.

According to Calciomercato.com, Luka Jovic is the latest name that the Rossoneri management are considering, as the Serbian striker wants a club that gives him confidence and space. His agent Fali Ramadani has been working for months to find the best solution and it must be considered that Jovic was very close to joining Milan in the January market implying it would be a welcome destination.

Olivier Giroud remains the main target, but Jovic is now the plan B. Maldini and Massara are defining the Brahim Diaz deal with Real Madrid and have asked for new information on the situation of the former Eintracht Frankfurt man. Ancelotti does not seem keen to use Jovic, who could leave on a two-year loan with obligation to buy.

Jovic has just returned to the Spanish capital after spending the second half of the 2020-21 campaign back on loan at Eintracht, where he scored four times in the league. He was a €60m signing for Los Blancos from the Bundesliga club back in the summer of 2019 (as per Wiki).