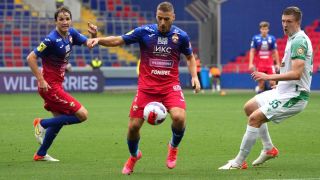 AC Milan are no longer leading the race to sign Nikola Vlasic from CSKA Moscow as West Ham have entered the race, a report claims.

With a week until the market closes, the Milan management are at work to secure the final touches for Stefano Pioli’s squad, with Tiemoue Bakayoko’s return close but little to be said about the attacking midfielder front.

As Calciomercato.com writes, the list of possibilities for the playmaker position is thinning and enriching with complications, the most recent for Nikola Vlasic who has been at the top of the wish list for weeks now.

Milan launched a first offer of a €5m loan with €20m option to buy that the Russian club rejected, and the pursuit did not progress despite the Croatia international’s desire to change clubs and his willingness to join the Rossoneri.

West Ham have jumped into pole position now and they are willing to pay €30m to sign him outright if they do not manage to seal the return of Jesse Lingard from Manchester United. Milan in the meantime evaluates other names, aware they could miss out.

READ MORE: Milan in talks over Porto forward and could move for Crotone star – the situation