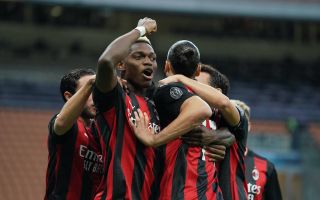 AC Milan rejected a significant offer from Premier League side Wolves for their forward Rafael Leao, according to a report.

The Portuguese starlet arrived from Lille in summer 2019 and had an inconsistent season last season, showing glimpses of what he can do without ever hitting stride. In 2020-21 though it has been a different story, as he has amassed three goals and three assists in eight games across Serie A and the Europa League.

According to Calciomercato.com however, it could have been a very different story as during the summer window Wolverhampton seriously probed the ground regarding a deal for Leao, who was on their shortlist of players to replace playmaker Diogo Jota who went to Liverpool.

It is of course no secret that Wolves are very close to agent Jorge Mendes and the Midlands club have a very strong of Portuguese players, but in this case there was no room for any dialogue or negotiations as Milan had no intention of selling Leao.

Milan in fact believe they have ‘one of the best young players in Europe’ in his role, and that his success is only a matter of time, while the player is very happy and wants to stay for a long time.