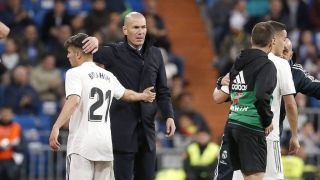 CM: Zidane asked Real Madrid not to lose Brahim – he will be watched closely in Milan

Real Madrid will be keeping a close eye on Brahim Diaz this season at AC Milan with Zinedine Zidane in particular keen on monitoring his progress.

The 21-year-old attacker joined the Rossoneri at the beginning of the month and already showed off to the fans during the friendly match against Monza at the San Siro as well as the one against Vicenza on Wednesday at Milanello, in which the Spaniard scored a goal and also added an assist.

According to Calciomercato.com, it was Zinedine Zidane who asked Real Madrid not to lose control of Brahim Diaz. On Friday the player spoke at his official press conference as a new Milan player, but at the moment he is only there on loan.

He will be watched closely during the season by Zidane to see how he develops playing in Serie A, suggesting Real Madrid will simply keep hold of him if he impresses.