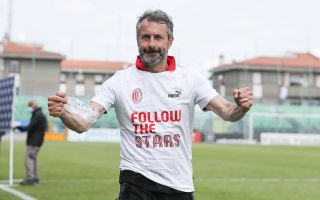 After the AC Milan Women made history and qualified for the UEFA Women’s Champions League, Maurizio Ganz spoke to Milan TV. There, he expressed his satisfaction about what the team had achieved.

The team managed to qualify after drawing 0-0 against Sassuolo and will play in the UWCL for the first time next season, with Ganz speaking to Milan TV and his words transcribed by MilanNews.

“The first derby we won will remain historic, and this qualification for the Champions League will be even more so. This is the fruit of the labour of these splendid players who have given it all from day one. But it’s not over yet because we still have to play the Coppa Italia final. Thanks to the girls and my staff and obviously to all the fans who followed us in front of the TV,” he said.

“We tiptoed our way [into this at the beginning of the season] in as we embarked on this great adventure. We have come a long way and we deserve to qualify for next season’s Champions League. The girls did a great job. We were also waiting for the results of this day to determine when to go to a training retreat. On August 18th, we will have our first match in Europe, so we will start training in early July. We are also convinced that we can do well in the Champions League.”

Similarly, Milan’s Valentina Bergamaschi also spoke of her delight after qualifying for Europe, with her comments also relayed by MilanNews.

“Finally, we will be in Europe next season, and we fought until the very end, but finally, our dream has come true. We also hope to find joy elsewhere, specifically during the final of the Coppa Italia Femminile on May 30th.

“The Champions League is a dream, it’s everyone’s dream, and it’s a historic qualification for Milan. We have made history and it is a great feeling. And despite everything, the fans have always been there for us. I dedicate this achievement to my grandmother who is no longer with us.”