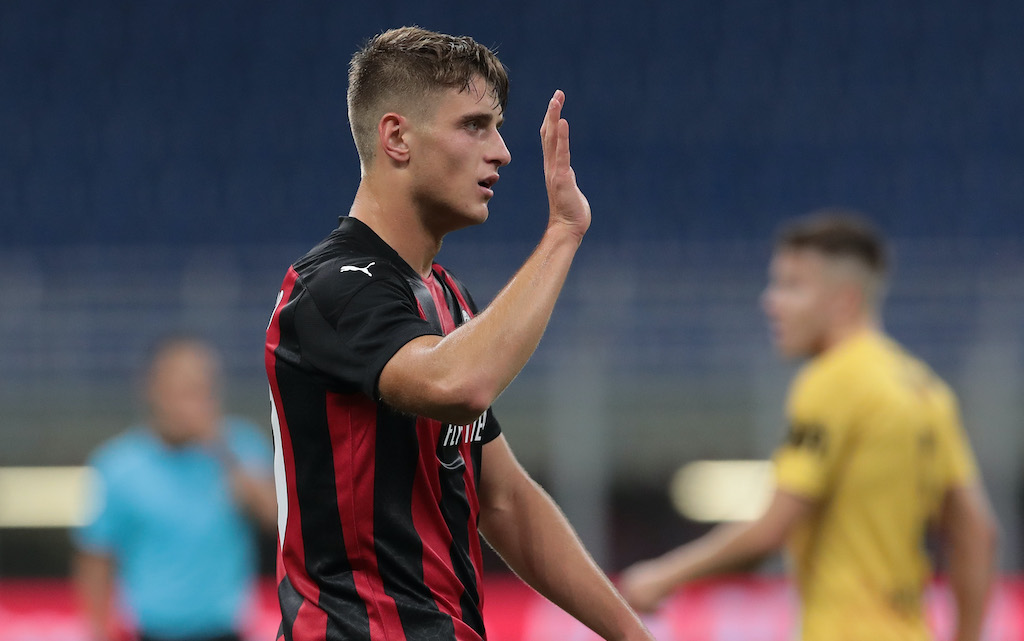 Colombo describes emotion of first Milan goal and declares: “I want to stay here for a long time”

Young striker Lorenzo Colombo described it as a ‘unique emotion’ to score on his first official start for the club at San Siro.

Milan secured their progression to the Play-Off round of Europa League qualification with a frantic 3-2 win over Bodo/Glimt, battling an injury crisis to set up a game against Rio Ave of Portugal next week.

Colombo was handed his first competitive start for the Rossoneri as the club confirmed earlier on Thursday that striker Zlatan Ibrahimovic has contracted Coronavirus, and the 18-year-old did not disappoint.

In the 32nd minute, there was a moment to remember for Colombo. An attack down the left flank resulted in Theo Hernandez pulling the ball back into the box and it was diverted to the far post by Calhanoglu, who gave the teenager the easy task of firing into an unguarded net as Haikin had gambled on the cross.

At the end of the game Colombo was interviewed by DAZN, and his words were transcribed by MilanNews.

“It was a great opportunity for me to demonstrate all the work I did to get here. We needed a team performance, it was difficult today. Now we recover for Crotone,” he said.

“The goal? A unique emotion, I have always worked for this. There is still a lot of work to be done, I haven’t done anything yet. I’m happy but tomorrow we’ll go back to work.”

On his character: “Having personality does not mean not having your head on your shoulders, you always need balance. The important thing is to have balance with the right personality.

“Staying with the senior team? Absolutely yes. I’ve been with Milan since I was a child, I want to stay here for a long time because it’s the club that raised me.

“Did Pioli take me off the transfer market? I had already taken off before, I want to stay here.”

Reports: Milan in talks with Barcelona over defender with €12m asking price set – the latest
19 January 2021, 12:45
Serie A Standings