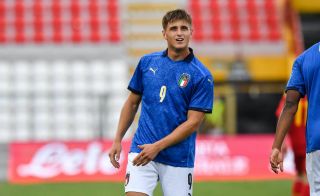 Colombo reveals reasoning behind SPAL loan: “Another step was needed”

Striker Lorenzo Colombo has revealed his belief that another loan spell was needed in order to help his future AC Milan career.

Colombo spent the second half of last season on loan at Cremonese and Milan decided that a loan move would do him well for this upcoming season as well. On their official website, they published a statement confirming that he had joined Serie B side SPAL for the rest of the season.

During his presentation press conference for SPAL, the forward talked about his experience so far in the Rossoneri and confirmed his desire to carve out a place in the future.

“Pioli and I have left well, we are both convinced that another step was needed to then wear the Rossoneri shirt in the future,” he said (via MilanNews).

The 19-year-old has impressed the Rossoneri management and they believe a lot in him for the future, but there’s no doubt that he needs more experience. Hopefully, this loan move will be exactly what the striker needs to grow.