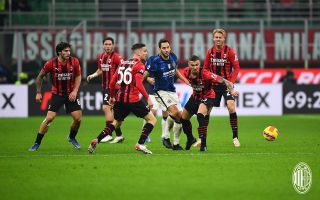 AC Milan can feel happier after drawing the derby against Inter last night because of three key reasons, according to journalist Paolo Condo.

In his column for La Repubblica (via MilanNews), Condò reflects on yesterday’s 1-1 draw between the Rossoneri and the Nerazzurri by claiming that Milan ‘won’ the draw at San Siro despite the fact the teams obviously ended level on the scoresheet.

The first reason for this is that Milan remain joint-top of the standings despite the fact that in the last few weeks the fixture list favoured Napoli. Spalletti’s side will have Inter, Lazio and Atalanta in the next games and missed a big chance to get a two-point lead over Milan.

The second reason is the unchanged distance from Inter, as we are at almost 1/3 of the season done with Milan 7 points above their city rivals. It is of course still a small figure that can be overcome in three games, but four points would have been a much more slender gap.

The third reason was a ‘beautiful’ final 15 minutes from Stefano Pioli’s side that certainly made the game look much more even, with Ibrahimovic’s free-kick well saved and Saelemaekers hitting the post in the closing stages.