AC Milan will be visitors in their own stadium on Tuesday night when they face Inter in the ‘away’ leg of the Coppa Italia semi-final.

A whole seven weeks has passed since the two sides drew 0-0 in what was a rather dull and uninspiring first leg at San Siro, and now the game carries an even greater meaning as the Milanese sides battle not just for a spot in the Rome final but also to get some all important momentum in the Scudetto battle.

Stefano Pioli insisted in his pre-match press conference that whoever wins the tie will not necessarily gain an edge in the title battle, while he also downplayed the effect of the away goal rule which means a scoring draw would see Milan through.

Pioli had to deal with a defensive crisis just before the game against Genoa on Friday night as Davide Calabria joined Alessio Romagnoli, Alessandro Florenzi and Simon Kjaer on the list of absentees due to intestinal problems, but the right-back returned to training today and should start.

That would mean that Pierre Kalulu shifts back into a centre-back pairing alongside Fikayo Tomori, with Theo Hernandez completing the back four in front of Mike Maignan. The midfield double pivot is expected to be Sandro Tonali and Ismael Bennacer.

Franck Kessie will not drop to the bench though as Pioli has essentially confirmed Brahim Diaz will not start tomorrow in a bid to neutralise Brozovic, so the Ivorian should get the nod with either Junior Messias or Alexis Saelemaekers to his right and Rafael Leao to the left.

Olivier Giroud will be asked to lead the line again with Zlatan Ibrahimovic out due to a knee overload, with Ante Rebic and Rade Krunic among the other elements who could make a difference off the bench.

Inter are in charge of their own destiny when it comes to the title fight as beating Bologna in their game in ahnd would send them top, and they come into this game having beaten Spezia 3-1 on Friday with goals from Marcelo Brozovic, Lautaro Martinez, and Alexis Sanchez.

There are no real injury issues for Simone Inzaghi to deal with as he has been blessed with an almost fully-fit squad for the majority of the season unlike his counterpart Pioli, though Alessandro Bastoni was taken off as a precaution on Friday after tweaking his calf.

However, the suggestion is that Bastoni seems to have recovered and should be available from the start meaning that Inzaghi – who is confident about the tie – has a clean bill of health.

La Gazzetta dello Sport (as seen below) are suggesting that Samir Handanovic will start in goal with Danilo D’Ambrosio preferred over Stefan De Vrij at centre-back alongside Milan Skriniar and Alessandro Bastoni.

Denzel Dumfries and Ivan Perisic should be the right and left wing-backs respectively either side of Nicolo Barella, Marcelo Brozovic and Hakan Calhanoglu in central midfield, with Joaquin Correa and Edin Dzeko tipped to get the nod up front. 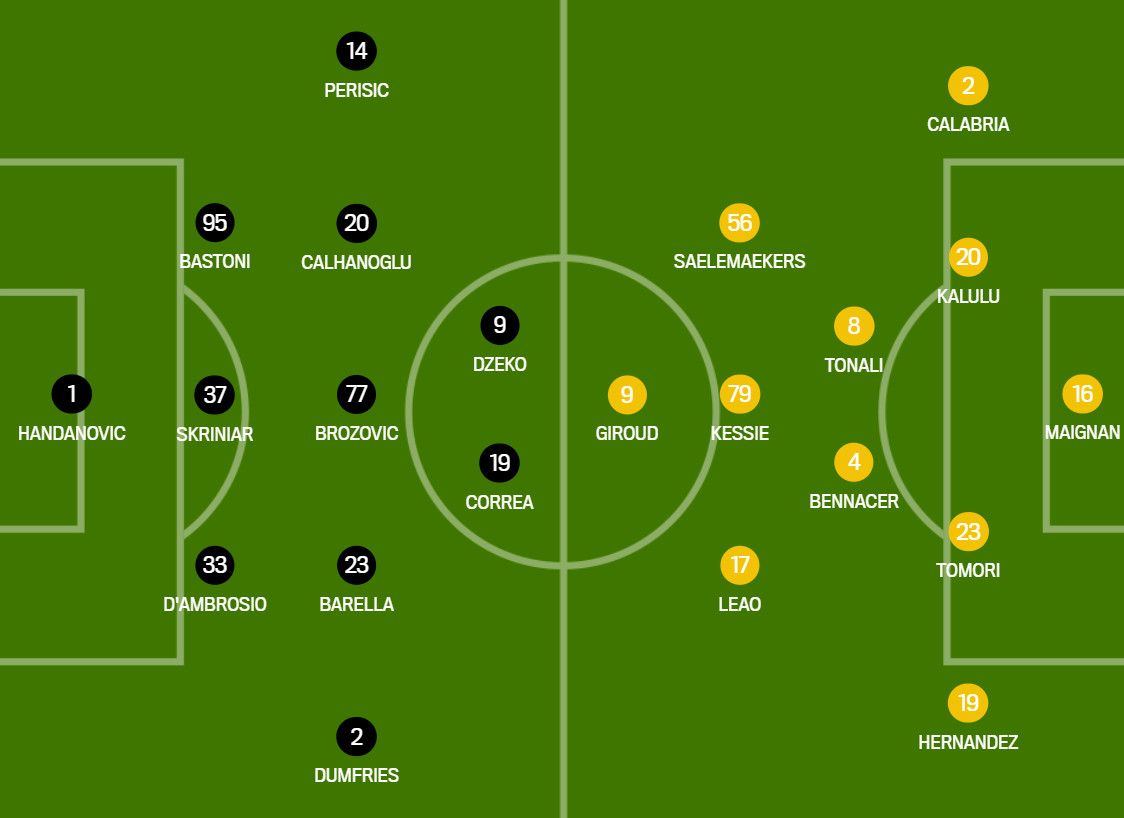 The Rossoneri and the Nerazzurri have faced each other 231 times in competitive fixtures so far in their illustrious histories, with Inter holding a narrow 84-78 lead in wins with 69 draws.

Milan have an advantage in the Coppa Italia though having emerged victorious on 10 occasions, with Inter winning 8 times and 8 draws. They last met in a cup semi-final back in 1984-85 when the red half of the city celebrated a 3-2 aggregate win.

In terms of other two-legged ties of note the sides have battled in the Champions League knockouts twice, with Milan emerging victorious both times through 1-1 and 5-0 aggregate wins.

The last league meeting was earlier this year when Olivier Giroud’s quickfire second-half brace secured a 2-1 comeback win for Pioli’s men after Ivan Perisic had netted the opener.

➤ This is the 27th meeting between Inter Milan and AC Milan in the Coppa Italia: the Rossoneri have won 10 times, while the Nerazzurri have eight victories (eight draws).

➤ Milan have qualified (or won the trophy) in five of their eight knockout matches against Inter Milan in the Coppa Italia – however, the last time these two sides clashed in a two-legged tie (quarter-finals of 1999-00 campaign) the Nerazzurri were the ones to progress.

➤ Milan are unbeaten in their last three games against Inter Milan across all competitions (W1, D2) – the Rossoneri last had a longer streak without defeat against the Nerazzurri in April 2005 (10 matches in that case).

➤ Milan will face each other four times in a single season (this is the first since 2004-05, three Milan wins and one draw in that case) – in seven of the previous 13, the Rossoneri have remained
unbeaten in all four seasonal matches.

➤ Inter have been eliminated in each of their last four Coppa Italia semi-finals, after progressing in six of the previous seven times they reached this point of the tournament: overall, the Nerazzurri are the side that have suffered the most defeats at this stage of the competition (19).

➤ Milan have lost only one of their last nine Coppa Italia matches (W4, D4): a defeat against Inter in the quarter-finals of the last edition of the tournament. That match ended 2-1 on 26th January 2021 and was decided by a Christian Eriksen direct free-kick in the 97th minute (Lukaku and Ibrahimovic the other scorers).

➤ None of the last 28 goals in the Milan derby across all competitions have been scored by an Italian player: the last one was on 27th December 2017, by Patrick Cutrone (in the Coppa Italia). His goal in the 104th minute saw the Rossoneri qualify for the semi-finals of the competition.

➤ Hakan Calhanoglu has been directly involved in both of Inter’s goals against Milan this season (in the two Serie A games, a penalty in the first game and an assist for Ivan Perisic in the second) – the Turkish player, however, hasn’t scored or assisted in in his last 150 minutes played in the Coppa Italia.

➤ Thanks to two goals against Inter in the last Serie A meeting, Olivier Giroud is close to equalling Jean-Pierre Papin as the top French scorer in the history of the Milan Derby in all competitions (three goals).

Theo Hernandez is a fundamental player for Milan and his 9 assists (6 in Serie A and 3 in the Coppa Italia) plus 4 goals show it, but the left-back has never managed to be truly protagonist in a derby since he joined Milan. He has played in eight and has only missed one, and in the last game he got into a spat wit Denzel Dumfries which should be a fascinating battle.

Then there is the two centre-forwards who will face off against each other. Olivier Giroud scored a match-winning brace in the league derby while Edin Dzeko has 17 goals in 42 games for Inter, but remarkably they could have both ended up on the opposite side of the Navigli.

Franck Kessie’s ability to play the No.10 role effectively and cut off Marcelo Brozovic’s attempts to dictate the midfield will be crucial, while Milan must in turn stifle Nicolo Barella in his creative role and must try and finally stop their nemesis Ivan Perisic who has 8 goal contributions in 15 games against the Diavolo.

This will be an incredibly tight game given that one goal for Milan is essentially worth double thanks to the away goal rule, and we expect both sides to play out a cagey encounter and perhaps accept the lottery of extra-time and maybe even penalties.

We give the edge to our neightbours just because the Rossoneri’s attack simply isn’t clicking and lack of depth may become an issue, but we hope to be very wrong.

Report: Sassuolo’s Mapei Stadium is sold out for Milan match on Sunday
GdS: Milan will go into a training camp in Reggio Emilia on Saturday
GdS: How Milan should line up in title-deciding clash with Sassuolo
Tags AC Milan Inter Milan
Related Articles
El Nacional: Mbappe’s arrival pushes Rodrygo towards exit – Milan weighing up a bid
17 May 2022, 20:19
TMW: Decision over Leao case postponed for a few days after hearing at court
17 May 2022, 19:02
Mundo Deportivo: Barcelona and Chelsea among clubs eyeing Romagnoli on a free
17 May 2022, 18:33
Serie A Standings