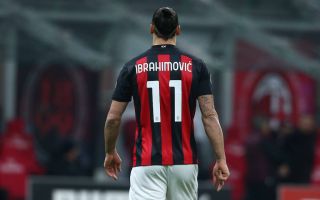 AC Milan will soon welcome Zlatan Ibrahimovic and a number of other key players back into the fold which will allow them to dream big.

As il Corriere della Sera reports this morning (via MilanNews), the Rossoneri have a number of important absentees like Bennacer, Saelemaekers and Gabbia plus Krunic and Rebic who have Coronavirus, but at Milanello there is enthusiasm about the return of Ibrahimovic.

He played a few minutes of the 2-0 win against Torino on Saturday, and he will be a key part of helping Milan achieve their next mini-target, which is to be top at the half way stage of the season (so after 19 games).

The last time Milan were first after the first round of games in the season dates back to 2011, when the Diavolo then ended up winning the Scudetto. They could secure the accolade a day early with a win against Cagliari.

With the return of Ibrahimovic – the absolute leader in the Milan squad – Milan can dream even bigger. However, at Milanello every player wants to think only of one match at a time and of a mini- target at a time.

Ibra is described as “an animal in a cage” by those who see him every day, and his return with be fundamental.