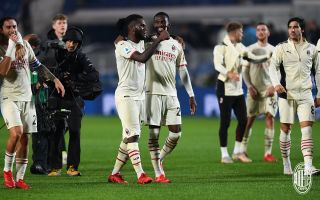 AC Milan produced a ruthless and clinical display in Bergamo to beat Atalanta 3-2 and move back second in the league table.

This morning’s edition of il Corriere della Sera (via MilanNews) writes that Stefano Pioli’s team has become a great one that can and must fight until the last day for the top positions. Milan were convincing in all areas of the pitch and once again won without Ibrahimovic and Giroud.

As per the paper, the team gave the impression of having what it takes to win the Scudetto, thanks also to the growth of individuals. Maignan has been top tier, Tonali is increasingly the master of the midfield, Kessie has given a good response to criticisms, Theo Hernandez’s runs always cause damage, Rafael Leao appears more consistent and Brahim Diaz makes the attack tick.

The international break arrives at the perfect time, and after it Ibra and Giroud should be back, while Bakayoko and Krunic should also be available again.