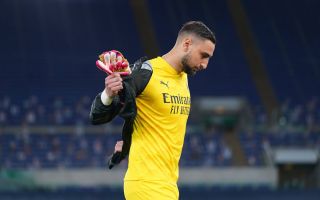 CorSera: Donnarumma in tears after heated confrontation with Milan ultras – the background

Gigio Donnarumma had a solid game against Benevento last night, keeping a clean sheet and making a few good stops. However, his renewal remains in the spotlight and it has become clear that the fans are unhappy.

As has been reported by many outlets already, the goalkeeper was confronted by a group of Milan ultras at Milanello yesterday. His current contract will expire in the summer and Milan have already made a hefty renewal offer.

According to Corriere Della Sera, as cited by MilanNews, Donnarumma was reluctant to face the fans but eventually talked to them. The group wanted clarity on the renewal and also asked him not to play against Juventus if it isn’t signed by then.

READ MORE: Dynamic Calhanoglu and the ‘old’ Hernandez – positives in Milan vs. Benevento