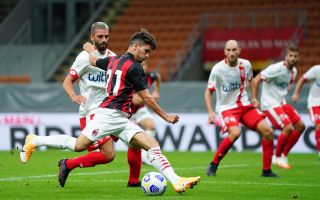 CorSera: First minutes for Brahim Diaz at Milan – flashes of class against Monza

Brahim Diaz was announced by Milan just two days ago, yet he played his first minute for the club against Monza last night. The Spaniard, who has joined on a season-long loan, could become an important player this season.

As highlighted by Corriere Della Sera (via MilanNews.it), the first impression was good. The game was very scrappy and he didn’t get many chances on the ball, but former Man City man showed flashes of class in the short time available.

A first glimpse of @Brahim Díaz in action 🔴⚫

The 21-year-old is very quick on the ball and since he’s two-footed, he can cause problems for the opponents. It remains to be seen what his position will be, though Pioli played him behind the striker as the trequartista last night.

It would also be interesting to see him on the right flank, but ultimately that’s for the manager to decide. In any case, it could turn out to be a very good signing by Paolo Maldini.