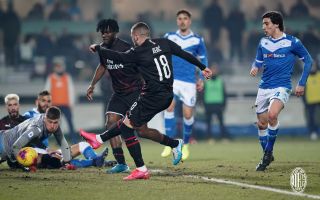 CorSera: Gigio and Rebic push AC Milan into Europe; Pioli still has a lot to do

A win worth double. Maybe even more. When you suffer for a majority of the game, but still manage to get the result, the three points weigh a lot. Their fourth consecutive win in all competitions.

Two players ‘rescued’ the Rossoneri last night. Rebic, the man of the moment, but above all Donnarumma and his talent. Gigio’s big hands paved the way for the Pioli’s men on the very complicated night in Brescia.

In short, as Corriere Della Sera points out (via MilanNews.it), it’s not only Ibrahimovic. The Swede didn’t have the best of games yesterday, although he was involved in the winner scored by Rebic.

Donnarumma, meanwhile, was a wall between the sticks to keep Milan in the game. The Rossoneri lacked almost everything yesterday, as the newspaper continues. The game, the spirit and the organization. But this time it’s fine.

At this stage of the season, results count more than performances. Now, Pioli’s men are in sixth place (at least for two nights) and thus in the Europe zone. Milan continue to climb the standings, but there is still a lot of work to do.