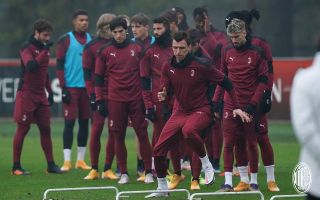 CorSera: Mandzukic has convinced everyone – he will already be available against Atalanta

Mario Mandzukic will be involved tomorrow as AC Milan host Atalanta at San Siro with the striker having impressed in training, a report claims.

According to il Corriere della Sera (via MilanNews), some questioned his physical condition since he hasn’t played an official match since March 2020, but Mandzukic has reassured everyone.

“If I wasn’t ready I would have I stayed at home watching TV. I worked hard to be able to seize this great opportunity, trust me,” he said during his official unveiling yesterday.

The paper adds that the 34-year-old wanted to remove all doubts about his fitness, ensuring that he worked hard to get ready for this new adventure in the Rossoneri shirt. Mandzukic made a good impression at Milanello right from the first training session and for this reason he will be part of Stefano Pioli’s squad for the game tomorrow.