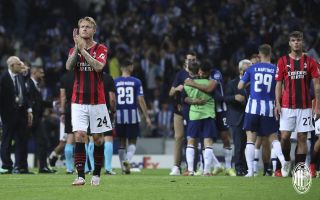 CorSera: Milan beaten due to another refereeing error after slow and disjointed display

AC Milan were left empty-handed again in the Champions League due to a dubious refereeing decision as they lost 1-0 at Porto last night.

This morning’s edition of il Corriere della Sera (via MilanNews) writes that there is a lot of anger over another refereeing error just as the ones in the game against Atletico Madrid meant that Milan went from deserved 1-0 leaders to losing the game 2-1 right at the death.

The right team edged the game last night on the balance of play, but the only goal came from Luis Diaz’s shot after a foul from Taremi on Bennacer, which was not seen by the referee Brych and not even reported later by the VAR.

With zero points after three games, the qualification for the knockout round will really hard for Milan. Liverpool’s success against Atletico Madrid still leaves a small door open, but it will be necessary to win the last three matches which will be very difficult.

Key players were missing last night just as they have been all season, yet the team suffered most of all from the subdued performances of several important players, who were too slow and just did not click. A response must come against Bologna.

READ MORE: Pioli believes in making the last 16 despite abject performance against Porto