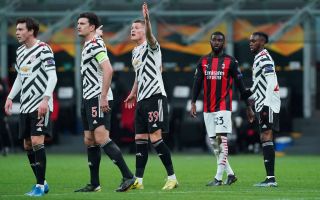 AC Milan’s adventure in the Europa League ended in the round of 16 against Manchester United after a spirited performance that wasn’t enough.

As il Corriere della Sera writes (via MilanNews), the Rossoneri had another good performance like at Old Trafford but the injuries – especially in attack where Castillejo had to play as a centre-forward – ending up proving too much.

The paper reports how Pioli’s team comes out with their head held high but also with several regrets since in the two matches they played better than United and unfortunately had the limit of scoring only one goal in two games despite the many chances created.

Milan are still in crisis due to injuries, but even those who have recently returned from some physical problems like Calhanoglu are struggling to find their best form. Now, there is only the battle for the top four remaining, which could be both a blessing and a curse.