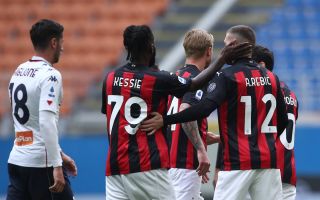 AC Milan were finally able to notch a home win after four games without one as they beat Genoa 2-1 to ensure they stay second.

As il Corriere della Sera writes (via MilanNews), it was not an easy match but on the contrary one in which the Rossoneri suffered a lot against the Rossoblu, but in the end they got three golden points in the Champions League race.

The decisive goal was actually an own goal by the most feared Genoa player – namely Gianluca Scamacca – who is one of the strikers in the sights of Milan for next season. Those who thought that the Grifone would show up at San Siro with a mind on their next crucial games against Benevento and Spezia were wrong, as they put on a determined display that could have snatched them a point.

Milan’s performance was rather disappointing and with too many mistakes, but as Stefano Pioli himself said in the post-match, the most important thing for the Diavolo right now is to win. The double save on the goal line by Kjaer and Tomori after a mistake by Donnarumma was excellent, but improvements will be needed against Sassuolo, Lazio, Benevento, Juventus, Torino, Cagliari and Atalanta. The paper writes that four wins from seven could be enough.