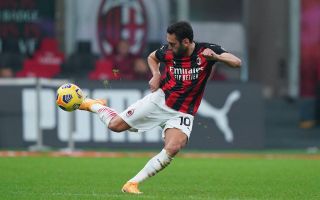 AC Milan face a difficult situation regarding the renewal of Hakan Calhanoglu as his agent has told them that Inter are interested, a report claims.

The Rossoneri face a tight deadline if they are to secure the renewal of the Turkey international given that his current contract expires in June 2021 so therefore in eight months time, and there has been no news from any source to suggest an agreement is near.

According to the latest from il Corriere dello Sport (via MilanNews), the renewal of Calhanoglu is one of the absolute priorities for the management. The player is tempted by Atletico Madrid, where Diego Simeone would gladly welcome him on a free transfer, but there is another suitor.

His agent Gordon Stipic has already made it known that Inter are also keen on his client, and this worries the Rossoneri even more than the idea of letting him go for free.

The negotiation is blocked at the moment because Calhanoglu is asking for €5-6million net per season which compared to the €2.5m that he currently receives represents a big pay rise.

The club are not convinced to commit to these figures until 2025 and with every passing week the situation gets more and more difficult.