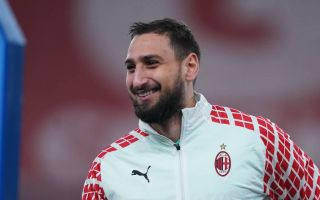 CorSera: Milan on the home straight for Donnarumma’s renewal – the figure to close

AC Milan are confident about reaching an agreement with agent Mino Raiola over the renewal of Gianluigi Donnarumma, according to a report.

With his current contract set to expire in June 2021 the Rossoneri management need to get a move on if they are to solve the goalkeeper’s future before the January window opens, though nothing but optimism has filtered from the media regarding the operation.

According to what is written today by il Corriere della Sera (via MilanLive), the parties could close the deal at around €7million net per season, which would be an increase of €1m compared to the current figure he earns.

The release clause is what needs to be solved, as Donnarumma’s agent would like to include a clause to be activated in case of non-qualification for the Champions League, but Paolo Maldini does not want one at all. The parties still have to negotiate to achieve the much desired white smoke.

Optimism transpires from Casa Milan, where the management are confident that they will find an agreement with a player who wants nothing other than to stay.